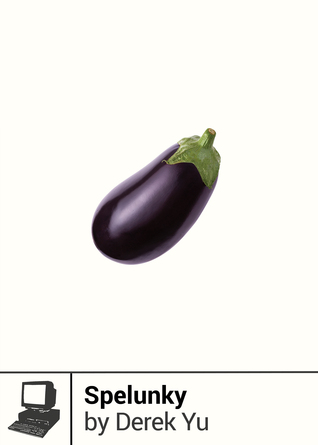 Spelunky is an amazing game.

Personally I’m not a huge fan of actually playing it, because I suck and die all the time. However, I still fire it up from time to time and play for half an hour before I get frustrated again.

I keep coming back to this game even though I know that I’ll get my ass kicked yet again. This is quite rare for me. Usually I’ll just move on if a game is too hard. I’m that kind of gamer, I guess. Apart from Super Meat Boy, Spelunky is the only game that keep pulling me back for more punishment. Why? Simply because its mechanics are amazingly well designed (oh, and it has an awesome soundtrack).

The book is written by the author of the game, Derek Yu. As luck would have it, he’s a great writer. Much better than I had expected from a video game developer.

I really like how the book has two sides to it: It tells the story about how Spelunky was developed and how it evolved as a game. But it also goes into quite a bit of depth about details of the game design. All the little dilemmas and details that you probably don’t even think about when playing the finished game.

Excellent games like Spelunky can be so deceptive. I still remember the first time I saw it. I loved the soundtrack immediately, but was unimpressed by the game mechanics. It looked so simple! What was all the fuss about?

Then, it slowly became apparent to me that although it is a simple game, it is so extremely well designed that it grows on you in a very special way.

The satisfaction of learning to control the basic weapon, the whip. Like…really control it. There’s a lot more finesse to this than just pressing the button.

The joy of seeing NPCs interact with each other in completely unexpected ways. The classic example of this is the boomerang man in the jungle (forgot his actual name) who loses his boomerang and steals a new one in a nearby shop, angering the shopkeeper and getting shot to pieces. Because, well, he was missing his boomerang and he is programmed to pick up the first one he comes across. Which in this case happened to be in a shop.

It’s a small detail, but it just contributes to a wonderful sense of coherence in the game that is probably one of the main reasons I love it so much. At some weird level, it actually feels authentic.

I mention these things because even though I’d noticed them from the game itself, the book gave me a much deeper appreciation of the work behind it. The reasoning behind why things behave the way they do. Also, it was really interesting to learn about a few of the more technical details that I’d never considered.

Note that (unsurprisingly) the book contains some pretty major spoilers about the game. Casual players may not even notice these secrets though, so this is mostly relevant if you expect to really geek out and pour hundreds of hours into the game to really master it.

Finally, this is a short and easy read. Well written in an easy language, and not very long (notice that the font size is quite big).

Highly recommended for anyone with an interest in indie games, also if you’re not a developer.